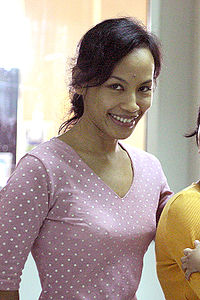 Utami's first novel, Saman, appeared in 1998, only a few weeks before the fall of Suharto, helping to signal the changing cultural and political landscape in Indonesia. The novel won the Jakarta Arts Council's first prize that year and caused a sensation, and controversy, among Indonesian artists and intellectuals[2]. It was acclaimed by many reviews and was considered as a new milestone in Indonesian literature. Saman also won the Prince Claus Award from Prince Claus Fund. "Saman" has sold over 100,000 copies and been reprinted 34 times[3]. The sequel to Saman, Larung was published in 2001[4].

Ayu Utami currently works for Radio 68H, an independent news radio station that is broadcast all over the country as well as a writer for the cultural journal Kalam and in Teater Utan Kayu in Jakarta. Her new play and book protesting anti-pornography legislation, Pengadilan Susila (Susila's Trial) appeared in 2008.

In Saman, Ayu Utami weaves together the twin stories of Indonesian feminist awakening and resistance to neo-colonial policies that devastated farmers and villagers during the Suharto era. The structure of the novel is complex, moving backwards and forwards in time from the 1990s to the 1980s and 1960s and among a variety of narrative points of view. A framing romance tale follows the story of Laila, a journalist who has fallen in love with Sihar, an already-married oil rig worker that she meets on assignment. When she witnesses a tragic accident on the rig caused by the negligence of the oil company's supervisor, Laila becomes caught up in Sihar's quest for justice. This leads her to put Sihar in contact with Saman, a former priest she once loved as a youth and who now works as a resistance activist. The plot takes us back in time to follow Saman's journey from the seminary to prison to continuing struggle against state oppression. This central part of the novel provides a harrowing account of how the Indonesian state is an accomplice to mercantile fascism, as a palm oil producer is allowed to expropriate the land and village of poor rubber farmers in South Sumatra. This is a compelling and distressing account of how the original Dutch colonial exploitation of Indonesia continued under the neo-colonial policies of Suharto's "New Order." In the end the novel returns to the lighter story of Laila and her female friends in the 1990s, who each represent different choices and possibilities for women in Indonesia.

Saman provides an important critique of the New Order, which was overthrown by students and workers in 1998. Coming out from under the censorship of Suharto, Ayu Utami's novel is a daring expose of truths that could not be previously told. Its candid and celebratory treatment of new freedoms for women, including sexual freedom, were dramatic innovations when they appeared.

Utami treats social taboos in an open way, thereby breaking with Indonesian literature to date. She writes freely about love and sexuality and picks up the difficult relationship between Muslims and Christians as a central theme – as well as the hatred towards the Chinese minority. . . . Utami’s prose is lively and modern, and as such reflects the richness of the Indonesian oral tradition. The author masterfully switches between various narrative perspectives, locations and time scales, links dream sequences and old myths with descriptions of the political and societal relations in Indonesia in the 1990’s [1]

Barbara Hatley argues that "a key 'innovation' of the text [Saman] is its subversion of long-standing conventions of female representation and women's writing in Indonesia, and of the concepts of womanly nature and gender relations in which these conventions are grounded."[5]Utami's novel violates the traditional expectations in Javenese and Muslim culture that women be accepting, domesticated, subordinate, and sexually innocent. The sexual boldness of its female protagonists and the frequent use of sexually explicit language in the novel go a long way toward explaining the uproar caused by the book's publication, something that readers from the West might find surprising.

On October 26, 2005 Ayu Utami participated in a panel discussion on the topic "Why I Write What I Write" at the Iowa City Public Library, sponsored by the University of Iowa's International Writing Program[6]. Her opening sentence states: "The beginning period of my fiction writing was probably a sort of adolescent struggle to negate the father figure." This figure, as the novels demonstrate, includes a variety of patriarchal social structures and institutions, literary conventions, and regimes such as that of former dictator Suharto[7]. In terms of literature, Utami explains that "My first two novels [Saman and Larung] negated the convention of novel writing in Indonesia at that time, which was that a novel should have a linear and coherent plot. My novels do not have that. Both are stories told through different kinds of narration and by different characters. Each character has his or her own way of telling stories. . . . The books have the rhythm of their content. Each book always starts with the introduction of the main character in a detailed description as if to seduce the readers, but then finishes abruptly."

Utami goes on to articulate how the specific plot elements of each novel inform the shape given to the narrative rhythm of the book, and defends herself against criticisms that seemed not to appreciate her method. Her unconventional style, she says, was also "a reaction to the discipline of journalism" and the repressive rules it imposes. Thus she rebelled against the linearity of journalistic writing as well as against the "euphemism that prevailedd in the Indonesian language" when it comes to sexual references. She concludes her remarks by giving a number of examples of how she deliberately used "negative sentences" in her novels--sentences whose use of forms of "not" or "no" create ambiguity. The "negative sentence," she claims, is a more complex sentence than affirmative or positive sentences. . . . Negative sentences are always more playful than affirmative ones." As an example she cites this sentence from Saman: "When I was nine I was not a virgin." The following sentence clarifies, a bit: "People didn't consider a girl who didn't yet have breasts to be a virgin." Thus for Utami, "Writing as Negating" works from the level of politics and plot down to the level of syntax itself. Looking forward, she playfully ends by speculating that "If I’m successful in negating the father figure, my next work will be a step forward to an attempt at self-negation."

In March 2008, Utami published Pengadilan Susila (Susila's Trial), based on the script of her theater play Sidang Susila, co-authored by veteran playwright Agus Noor. According to The Jakarta Post, "Ayu considers her new book a weapon to fight against the morality movement and regulations that violate women's rights."[8] The theater piece and book grew out of Utami's involvement in protests against a proposed anti-pornography bill being discussed by the Indonesian House of Representatives. In an article covering the play's production by Yogyakarta's noted theater troupe Teater Gandrik, actor Butet Kartaredjasa said the play exposed the camouflaged moral truths that the Constitution tries to enforce: "Sidang Susila hints at the dark shadows of an authoritarian regime that acts under the name of morality." A summary of the play goes like this:

Sidang Susila begins with the impact of the enforcement of the Law on Decency on the public. In the play, those believed to have violated decency are arrested by the authorities, including Susila, who is played by veteran actor Susilo Nugroho. The play then centers on Susila, who is put behind bars, powerless, by the state authorities. Susila is accused of “committing” pornography for bearing his large “breasts” in public, therefore violating the new law passed by the political elite. In fact, he is only a poor hawker of children’s toys and has committed no wrong. The arresting officer in the play ignores Susila’s claims that he is in fact a man, and that his chest is enlarged due to a tumor. Susila is then incarcerated and tried. It is here that the rulers act arbitrarily. The official interrogation report is made by force and the court proceedings are directed to cater to the rulers’ wishes[9].